Apart from unhealthy hair, one of the biggest fears of men is what’s commonly known as “going bald” or “thinning on top,” but collectively all mean the same thing, which is losing hair. Unfortunately, it is an almost inevitable problem that a lot of people will face, and contrary to common belief, it affects women too, not just men. According to statistics, 40% of men have noticeable signs of hair loss when they reach 35 years old. It only becomes worse as they get older.

There are many factors why people lose hair. Generally speaking, you can blame genetics for this problem. There are also instances when it’s your lifestyle and occupation that causes hair to fall out, such as continual stress. Some studies show that using too much styling gel or mousse, and not washing it out for a number of days also has a detrimental effect. However, there are proven instances when the loss is due to your diet.

It’s worth noting that foods for healthy hair and ones which promote growth are very similar, but generally speaking, by improving your diet it is possible to get a full head of hair again. Here are some food options that you can incorporate in your meals to prevent hair loss and perhaps even help it grow back.

Foods That Can Stop Hair Loss

Yogurts are usually associated with weight loss. It’s the most common alternative for ice cream. What most people don’t know is that Greek yogurt also comes in handy in helping you prevent loss. It has the right amount of protein content, which is necessary for hair growth. It is also rich in vitamin B5 or pantothenic acid that can help improve the overall circulation on your scalp.

A lot of people have used cinnamon in food that they eat. Could it also help prevent hair loss? According to herbalists, this could be the case. It contains volatile oils including eugenol and trans-cinnamic acid. These are oils that can help prevent fungal infection and also have a good antioxidant property. It has also been noted that cinnamon can potentially help improve the overall circulation on the scalp just like the aforementioned Greek yogurt. Some individuals even make use of cinnamon not only as food but also as a topical application on the scalp. Cinnamon can be used in many different ways such as in sprinkles in one’s coffee or as flavorings to one’s curry; no matter how it’s used, it’s easy to reap the benefits.

There’s a reason why it’s always a good idea to eat eggs for breakfast. Eggs are packed with protein not to mention other components that can help prevent hair loss. It contains biotin which not only strengthens your follicles but also strengthens your fingernails. The lack of biotin in someone’s diet has been associated with cases of thinning hair. Eggs can subtly be mashed and mixed into one’s food if the taste is unappealing, but for those who don’t mind the taste, a boiled egg every day can quickly have very positive benefits indeed.

Oysters are a true delicacy that may not be readily accessible for everyone, but if possible, eating these saltwater clams will provide a generous boost of Zinc. Zinc is another essential mineral that can help prevent hair loss as well as strengthening your bones, reducing acne, improving the immune system, and also boosts sex drive. Deprivation of zinc in your diet could lead to your eyelashes falling out. This option is also a great source of protein which can make the hair less brittle. 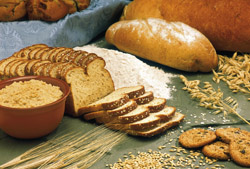 Barley is one of the world’s healthiest foods, and such is rich in vitamin E. Due to its nutritional value, it works wonders for those suffering from asthma, arthritis, and various skin problems too. This powerful anti-oxidant is especially useful for helping people suffering from hair loss due to sun exposure. If you have to work under the sun, or if you love going outdoors, this should be part of what you eat. Sun damage is one of the many causes of thinning on top. In a study conducted on patients, receiving vitamin E supplementation can help improve regrowth by 34%. Although it’s already commonly found in bread and cereal, extra barley can easily be added to a hearty soup or similar for better flavor and tremendous all-round health benefits.

Ferritin levels can say a lot about your thinning hair. If you’ll consult with a dermatologist, ferritin level in the blood is one of the first things that they will look into. To spike the ferritin level in your blood naturally, you can incorporate bokchoy or pakchoi, a type of cabbage, in your meals. It is also rich in iron which can help overall circulation in your scalp and hair.

If you have tried any or all of the above to no avail, why not try some special shampoo for hair loss, or perhaps some hair growth vitamins instead?

Ash is a self-confessed hair expert and blogger. He loves styling his son’s hair and will sometimes even cut and style his wife’s hair (when she’s feeling brave).

PrideOfHair.com is supported by our readers. If you buy through links on our site, we may earn a commission. For full details visit the disclosures page.